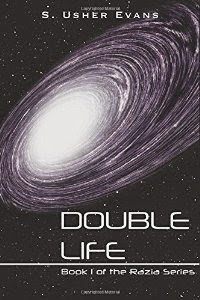 I've always been the type that drifts. I don't mean drifting of to sleep, or the lesser advised drift style of racing, rather I'm talking about allowing my mind to drift off into fantasy. It may seem like a quote from a cheesy 80's after school program, but it truly is amazing where your imagination will take you if you let it. I've been everywhere from the Spine of the World mountains with my childhood hero Drizzt Do'urden, to the bridge of the Normandy fighting Reaper's with Commander Shepard.

The protagonist in S. Usher Evans' Sci-fi tale Double Life has that same character trait. Except instead of losing herself in her imagination, she gets to live her imagination in her second life.

The story opens on young Lyssa and her father exploring a heavenly body known as Leveman's Vortex. Her father is the only one who has ever been able to navigate the body whom many revere as the gateway to the afterlife. As her father's temper erupts the Arch of Eron erupts in kind sending young Lyssa plunging into a river of fire.

As we're moved to the future we find Lyssa now has attained her doctorate in the same field of deep space exploration as her father, and is now surveying and selling planets to development companies. Her life at the academy takes a back seat, however, to her true calling as a bounty hunter. Using her studies and planet surveying as a funding source, she shoots through the galaxy chasing some of the galaxies most wanted space pirates, or at least that's her goal.

Razia, her alter ego, is the only woman pirate ever to have been accepted into one of the four main pirate "webs", but has been stuck on probation since her joining. The leader of the web keeps her on bounties that can't pay the cost of chasing and collecting the men. To make matters worse her boss at the academy gives her an intern that happens to be one of her many siblings, to spy on her actions and locate her father who has been missing since the incident on Leveman's Vortex.

Caught between a raising price on her head and keeping her brother, Vel, from discovering and reporting on her actions, Lyssa tries to climb the pirate ladder while slowly pushing her 'normal' life to the side. Once the snakes begin to reveal themselves her only hope lies with trusting part of the family that has shut her out and despised her for almost 20 years.

There's a certain laid back nature that comes across in Evans' writing. While the story gets deeper and more thrilling, there is a certain easiness to her writing that keeps you in that moment without being overwhelmed. There are a few places where the calm writing affects some of the places where you would expect some more emotion from either Lyssa or Raiza, but both characters lean towards anger and Evans has no trouble portraying the fiery anger that emanates from this character.

What I liked:
Overall I'm going to give Double Life a 8/10 based on:
\
8/10 for readability - I've mentioned this a couple times now, but I can't say enough that I enjoyed the relaxing nature of the story. This gave the story a nice smooth flow that kept the pages turning, even when the action wasn't quite there.

7/10 for story - I enjoyed the overall story idea as a whole, but where I found a disconnect was the slow developing nature of the story. Starting with a huge traumatic event was a plus, but otherwise it was a bit slow in developing. I would have like to have seen a little more of the action that comes at times.

8/10 for characters - The characters of Double Life cover the spectrum of personality types. You have pure good, pure evil, intense and laid-back. Each one brings an important role to the story, even the ancillary 'bounty' characters Raiza chases are unique and make small stories, though she only chases a few in this volume.

X-Factor - I feel like the main selling point for this story is its namesake; the double life that Lyssa leads is such a different spin then I've read in relatable stories. Both characters are the same, but not so much that you wonder how nobody has put 2 and 2 together. Both are fierce, fiery women that rule this story with their personalities alone.

In the end Double Life by S. Usher Evans is a lighthearted sci-fi space adventure that spans the universe. Each page turn presents more and more of an ever growing story in the lives of Lyssa and Raiza. I'd recommend this spirited adventure to any sci-fi fan as a great weekend read.

A big thank you to author S.Usher Evans for reaching out to me about this story. I look forward to seeing  a second volume and reading more about Raiza and Lyssa's adventures in bounty hunting, and extra planetary exploration.