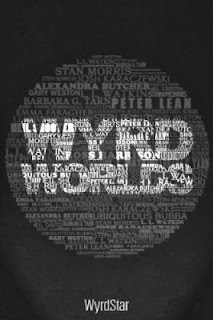 For this review I was approached by author Steph Bennion in regards to the title Wyrd Worlds. I didn't realize quite how difficult it would be to review a book that is a collection of short stories collaborated by several different authors. I debated whether or not to do a mini review for each story, but with the book being filled with fourteen stories by twelve different authors that would have been a stretch; even giving each author his/her own review would be a feat in itself.

There are a few familiar faces in this collection, some of which I've already critiqued at one point or another; specifically Emma Faragher, L.L. Watkin and Stan Morris, click on the names to see the previous review. All three of them offer great contributions to Wyrd Worlds in the Sci-Fi and Fantasy genres.

Steph Bennion herself contributes two of the stories, she also took on the role of editor for this book. Due to the amount of different authors and story types, I felt it would benefit both the readers of the book as well as my readers to do a short interview with Bennion which you can find at the end of this review.

The first of the two stories Bennion contributed is titled Antimatter Me and is a short, science fiction, title involving a take on the advancement and creation of matter transmission, or teleportation. It centers around two beings created during the first human test of the teleportation system. Though I don't typically rate short stories I would definitely give this a 9/10.

Bennion's second story is titled In the Lap of the Gods and is a modern tale of ancient Gods. Dr. Krakenspreken (a name that will make any fan of Clash of the Titans or Greek mythology in general smile). There are different mythologies brought back to life in this story, each with his/her own agenda. Just as she did in AntiMatter Me, Bennion created a well written, creative story that could very well have been turned into a full-length novel.

Overall this story really is a must-read, and the $0.99 price-tag on Amazon is a very small price to pay to be introduced to as many great authors as Wyrd Worlds offers. Since the stories are so varied I really can't review it as I typically do with single author titles.

I'm, instead, going to give the title an overall score based on the combination of each story.

As a whole I'm going to give Wyrd Worlds an 8/10 based on the fact that its an overall strong title full of indie authors that each brought their A game.

Since I didn't get to review the title as I nomally do, I decided to do a short interview with editor, and contributing author, Steph Bennion. At the end of the interview I'll post a link where you can purchase Wyrd Worlds and also titles by some of the contributing authors.


Whose idea was the collaboration?
It came about through my role as a moderator for the Smashwords Authors Group on Goodreads. I like to look through comments made by new members and there was a period when every other author joining seemed to be a science-fiction or fantasy writer who wrote short stories. I suggested the idea of an anthology via a post on the same forum and it took off from there.
How did you become tasked with the job of editor?
Once it became clear there were enough people interested, I decided it was only fair that I should volunteer my services! It wasn't a solo effort; a big thanks is due to Ross Harrison (one of the contributing authors), who designed the book cover for us, free of charge. 'Editor' is perhaps not quite the right word; I collated the ebook and made various decisions regarding the overall layout and so on, but on the whole the stories themselves were published as submitted.
There are many great stories by many great authors. We're there any stories that had to be scrapped?
There were a couple of authors who were keen to contribute but in the end didn't manage to write anything in time, which was a shame. There's always next time...
What was the general theme of the collaboration? Was it more of an open forum or did each author have a specific topic or idea to use?
Other than keeping it to science-fiction and fantasy, there was no overall theme. I think the anthology benefits from that; the stories are quite varied, with something for everyone!
Both of your stories were wonderful, I'm a particular fan of Antimatter Me. Did you write these stories before and submit them to the collaboration, or were they written specifically for Wyrd Worlds?
Thank you! Antimatter Me, which is told from the point of view of someone experiencing time in reverse, was written for Wyrd Worlds. I was reading a biography of the late avant-garde writer B.S. Johnson at the time, which gave me the idea to try something a bit more experimental. My other story, In The Lap Of The Gods, is something I've had on the back-burner for a while. It shares the same 'universe' as my science-fiction books and adds a bit of context to my novels Hollow Moon and Paw-Prints Of The Gods. The anthology was the encouragement I needed to actually finish the story!
Are there going to be more collaborations in the future between you and other authors?
I don't see why not. There's been a few comments about Wyrd Worlds II already on the Goodreads forum! I had fun working with everyone on this and I think the end result was well worth the effort of all concerned. And it's free!

If you would like to pick up a copy of Wyrd Worlds you can find it here.

Titles by some of the other contributing authors: